Saugerties Pro Musica works tirelessly to bring a variety of top-level performers in all fields of music each month to their venue, the United Methodist Church in Saugerties. In October, pianist Olga Gurevich dazzled with an energetic and technically demanding program of Russian music. In November we enjoyed “Dragons Rising and Tigers Leaping,” a program of traditional and modern Chinese music presented by students from the Bard College Conservatory of Music. Here are some pictures I took, along with explanations. But first let me add that these talented young ladies will be around giving performances in other venues in the region. Be sure to watch out for them! They are a real treat. 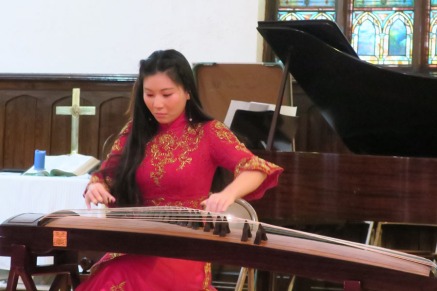 Yixin Wang, accompanied by pianist Ivy Wu, plays a contemporary piece for guzheng. This was the most fascinating instrument of all, capable of an amazingly wide variety of sounds. This was a technically challenging piece; the musician wears special picks to keep fingertips from being shredded!

In contrast to the drama of the guzheng, the erhu, played here by Chang Liu, is a lyric instrument that very closely resembles the human voice. The piece was by an early 20th-century composer. 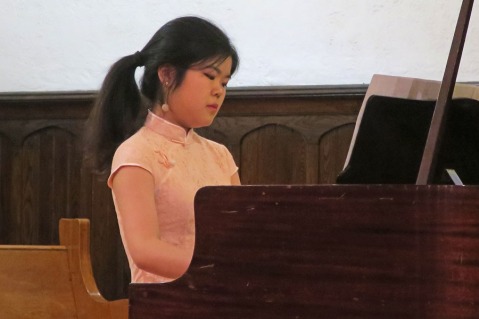 Pianist Helen Wu played selections from the composer most likely to be familiar to Westerners: Tan Dun, whose opera “The Last Emperor” was performed at the Metropolitan Opera in 2008 with Placido Domingo in the title role.

The program closed with a traditional Chinese song.