The fiftieth anniversary of Scenic Hudson was celebrated yesterday with a magnificent exhibition in Grand Central Terminal’s Vanderbilt Hall. Twelve outstanding photographers from the Hudson Valley contributed their work that (to quote from the special brochure) “resonates with the organization’s mission and major achievements while also addressing the complex conservation challenges on the horizon.” The variety of content and artistic approaches displayed by these photographers was amazing–a tribute to the

beauty and sublimity of the Hudson Valley landscape and to the challenges that face Scenic Hudson in ensuring that this beauty and the ecological health of our region are preserved for all the future.    I would imagine that not since Robert Glenn Ketchum published his book The Hudson River & the Highlands has any photographer consistently documented, in an artistically compelling way, those conservation challenges the way Susan Wides and other artists in this exhibition have done. Susan’s work is inspired by the Hudson River landscape painters of the 19th century, and let’s not forget that the founder of the Hudson River School, Thomas Cole, is considered one of the first spokespersons for the American conservationist movement.

And then there are the photographers who speak eloquently by capturing this beauty so as to remind us of what a treasure we have and, by implication, what we stand to lose if we don’t act with foresight.  As always, Beacon-based Robert Rodriguez Jr. is a very great favorite of mine, and I sometimes visit the RiverWinds Gallery there to treat my eyes (and my soul, dare I say) to his work on display.

Scenic Hudson is responsible for some sixty parks that they have created or enhanced, and I’m grateful to Metro-North Railroad, and to

the fine-art photographic paper company Canson Infinity, who donated the paper on which the photos were printed, for bringing to the attention of the thousands of commuters who pass through Grand Central Station’s portals each day the fact that it’s Scenic Hudson they have to thank for so many of the places that they likely visit and enjoy on weekends. Just to name a few that I’ve actually visited: Burger Hill, Esopus Meadows Preserve, Foundry Dock Park, and Walkway over the Hudson. And in visiting their website I was delighted to learn that on Thursday October 24 they celebrated the opening of the new park at the West Point Foundry Preserve at Cold Spring. Rest assured, I’ll be blogging about this historically significant site before long.

Poughkeepsie’s historic Main Street district. The building on the right houses the Mid Hudson Heritage Center, where I’ll be doing a talk and book signing on Thursday October 24.

Poughkeepsie in Dutchess County has been an underexplored territory in my photographic repertoire, and yesterday I set out to put that right, especially since I’ve been invited to give a talk there at the Mid Hudson Heritage Center later this week, in conjunction with a book signing for our Historic Hudson Valley: A Photographic Tour.

The “Queen City of the Hudson,” as Poughkeepsie is known, is home to many sites of historical significance, including the Bardavon Theater. It also contains the eastern terminus of the 1.28-mile-long Walkway over the Hudson State Historic Park, the longest elevated pedestrian bridge in the world. The result of a determined community effort to transform an abandoned railroad bridge into something that people can enjoy, the Walkway stands 212 feet above the Hudson River and offers superb views.

Poughkeepsie boasts a number of historic districts. Here are some photos I’ve taken of the Main Street district. One of the buildings houses the Mid Hudson Heritage Center, one of the city’s leading cultural institutions.  My lecture and book signing (I’ll be talking about the Hudson River Artists and showing slides of some of their work and mine) is Thursday October 24 at 7.30 pm.  Join us if you can!

This amazing sculpture stands along Main Street. Can you find me in the picture?

A mural about the Hudson’s own “Loch Ness Monster.” I once encountered him and dubbed him “Hudson Henry.”

Another view of Main Street

Opposites attract, so they say. That could well apply to the two foremost painters of the 19th-century Hudson River School, Thomas Cole (1801-1848) and Asher B. Durand (1796-1886). Of course, they had much in common, most notably their incredible artistic gifts and their love for being outdoors in the open, away from the noise and bustle of the city. (If they complained about the noise and bustle then, can you imagine their reaction if they were to visit it today?)

But when it came to the details — to each man’s individual approach to their work — Cole and Durand were quite different. As a photographer, I like to put it this way: If they were landscape photographers working today, Cole would have been one of the first to own a digital camera and to take full advantage of all that Photoshop has to offer in the way of processing the photos. Durand, on the other hand, would still be using a film camera — one of those large-format ones, no doubt — and would make only the most minimal use, if at all, of photo processing software.

Durand painted what he saw. It’s as simple as that. He was one of the first in America to use the plein air technique, meaning that he actually painted outdoors, painted immediately what he saw. Some of his paintings are so exact that it’s possible even today to identify the spot from which he painted a particular scene.

One such painting is Beacon Hills on the Hudson River, Opposite Newburgh. Durand’s business was such that he had to live in New York City, but he took every opportunity, especially in the nice weather, to get out and travel, not only to paint but also to walk and fish (he was an avid sportsman). For a few years (roughly late 1840s–early 1850s) he owned a vacation home in or near Newburgh, in Orange County, from which one can look right across the Hudson River to Beacon, and it was there that he painted this picture (above). 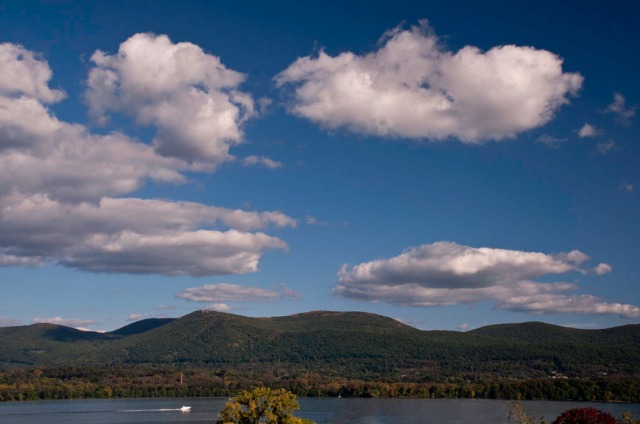 Since I don’t live far from Newburgh, I decided to test it out. Armed with my camera and my intuition, I drove up Route 9W and parked along Water Street. On the side of the street opposite the riverfront a hill rises up, leading to some homes as well as to the city’s historic district. Since Durand painted his picture from a height, I walked up the hill with my camera and tripod. It was easy, instantaneously to see what Durand had painted. Compare the contours of the mountain peaks to see what I mean.

I didn’t aim either to replicate exactly the contents of Durand’s painting (impossible anyway–there’s now a railroad running through the scene, apparently one reason why he gave up the house after three years or so) or to process my photo to resemble the painting. Interestingly, Durand loved clouds–he was of one mind with the English painter John Constable in that–and may well have envied the sky I had that day.

Another scene Durand painted that is claimed to be so exact that the spot can still be located is Dover Plains, Dutchess County, New York. Dover Plains is near the Connecticut border and is, as I discovered, a challenging drive. I probably shouldn’t have trusted directions that say “When you pass the last house…” (last house where?), but I drove around and around and never found the spot. If anyone reading this can help me out, I’d be very grateful. Otherwise, one day I’ll conscript a volunteer into driving me there so I can watch out for the view.

This photograph isn’t in our new book, Historic Hudson Valley: A Photographic Tour, but plenty of other good photos are! Check it out here.