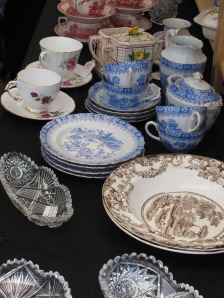 It would be difficult to imagine a better venue than Mayor’s Park in Cold Spring for an antiques and crafts show to be held in the middle of the summer. The park is situated virtually on the banks of the Hudson, thus affording superb views of the Highlands (including Storm King) on the opposite side of the Hudson and—best of all on such a typically hot summer day—cooling breezes from the river. 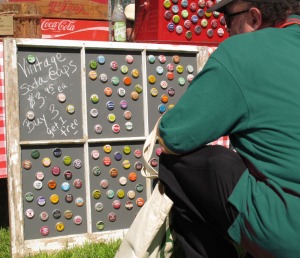 g from jewelry, furniture, and soaps to pottery, clothing, and porcelain. One of my favorites was the booth that sold vintage soda caps (now who on earth would have thought to save such things—and in the days before recycling, no less?)—and of course, I had to go and touch base with the two photographers that were exhibiting their beautiful art, John A. Anderson and Robert Goldwitz.

This was my first

visit to Cold Spring’s antiques and crafts show and I wasn’t disappointed. The variety of goods for sale was amazing. Given my current interest in turning some of my photographs into what I call “faux vintage” images, I couldn’t resist purchasing some vintage postcards.

Having once tended to oppose this show—it was the brainchild of David Cooke, who still organizes it—local merchants are now in favor because the crowds tend to spill over into the town’s shopping district and patronize the shops and restaurants on Cold Spring’s bustling Main Street. I ended up, as usual, at Foundry Dock Park, where I was able to cool my feet in the Hudson River (the shore is quite rocky there; fortunately I had waterproof shoes).