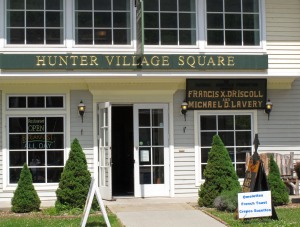 I’ve followed Northern Catskills photographer Francis X. Driscoll’s work for years and so thought I had an idea of what to expect when I drove up to Hunter to view an exhibit on which he collaborated with folk artist Michael D. Lavery. Was I ever wrong. Fran Driscoll’s work, always stunning at the best of times, was, here framed by Lavery’s woodwork creations, simply mindboggling. Actually, it’s inaccurate to call this an exhibit of Driscoll’s photos in frames made by Lavery. What the pair have done is to merge their creative vision so that each piece forms an artistic whole, Lavery’s frames being fashioned to form an extension and enhancement of Driscoll’s photos.

The exhibit is titled “Keepin’ It Greene”–a play on words, because it’s about their native Greene County as well as about preservation.

Let me quote from the official write-up:

“Francis X. Driscoll, whose landscape photographs of the Catskill Region are widely recognized and loved, and Michael  Lavery, folk artist in the lively, animated Tramp Art genre, have come together as friends and fellow artists to share with us their inventive and thought-provoking expressions created as a direct result of their involvement with experiences before, during and after Hurricane Irene.

“Driscoll and Lavery, both full-time residents of Greene County, were deeply affected by the hurricane and its aftermath. As they traveled separately from town to town surveying the devastation and lending a hand wherever needed, each was struck by the spontaneous appearance of the cooperative efforts of family, friends and strangers that quietly and modestly infilled a certain inner order and peace they found prevailing in the midst of the mindless destruction surrounding the area.”

One of the artworks has been donated to the State of New York and will go to hang in the permanent collection at the State Capitol. New York Governor Andrew Cuomo has recently announced the revival of the beloved “I Love NY” slogan to promote tourism for the state; whether the acceptance of this particular Driscoll/Lavery masterpiece is purely coincidental or is connected with the renewed accent on “I Love NY,” I don’t know. You’ll see what I mean when you visit the exhibit.

“Keepin’ It Greene” is at Kaaterskill Fine Arts, Route 23A (Main Street) in Hunter. Gallery hours are 10 am – 5 pm (Thurs.-Sat.) and 10 am – 3.30 pm (Sun.). The last day of the exhibit was to have been Sunday June 3, but I understand that it’s being held over for another week, until June 10. If you love the Catskills, beautiful photography, exquisitely carved woodwork, and want to be bowled over by a display in which each individual piece combines the photography and the woodwork in ways you never could have imagined, don’t miss this show.