To the left, one of Vincent Bilotta’s images on a window of the gallery; to the right, some of Dan Burkholder’s scenic images

If you like art that’s daring, original, visionary, really pushes the envelope, you shouldn’t miss the new photography exhibit, Light Sensitive, that opened last weekend at the Kaaterskill Fine Arts & Crafts Gallery in Hunter. Carolyn Bennett has brought together three amazing artists, all of whom know one another, live within a few miles of one another (two in Palenville and one in Catskill), and are as different in their approach to their art as you can possibly imagine. What’s more remarkable is that all three are photographers — this exhibit pushes the limits of what photography can do beyond anything I’ve ever seen.

Dan Burkholder describes his working methods to some gallery visitors. One of his images is on the wall.

Dan Burkholder is at home in both the traditional and the digital darkrooms and uses his skills to create hauntingly exquisite scenes of the surrounding Catskills area as well as further afield (images from Italy were particularly compelling). His style is distinctive and consistent. I knew Dan originally through the West Coast photographer William Neill, who is unarguably one of the greatest living photographers of the scenic world. You can’t get a better recommendation than that.

Vincent Bilotta with more of his images in the background

Vincent Bilotta’s work is colorful and striking. Some of his images in this show are actuallymounted on the windows of the gallery. If that strikes you as something akin to stained glass, you’re on the right track: his current art project is a “Catskills Chapel” devoted to the “great [scientific discoveries” of the last 500 years.” 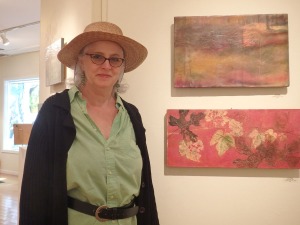 Dawn Potash poses with two of her creations

Fawn Potash is the most experimental artist of the three, combining medical imagery, satellite photography, and botanical studies to produce a series called Bodies of Water Close to Home. She explained to me how she saw resemblances between leaves, for example, and the systems in the human body, and how she  created artworks to bring this out. I couldn’t help thinking of the writings of the medieval naturalist and theologian Hildegard of Bingen.

Light Sensitive is open through approximately the end of September. Be sure to stop in at the Kaaterskill Fine Arts & Crafts Gallery and have a look.

That area of the Northern Catskills known as the Mountaintop is home to heartbreakingly beautiful scenery, gorgeous summer days, inhospitable winters–and an amazingly active colony of artists and crafters. I’ve written about photographer Francis Driscoll in these pages (and will be doing so again) as well as crafter and antiques dealer Cindy Smith. Now, as a lover of the Mountaintop I’m pleased and proud to report on a wonderful exhibit by Mountaintop artists Peter Liman and Sheila Trautman in Ridgewood, New Jersey. 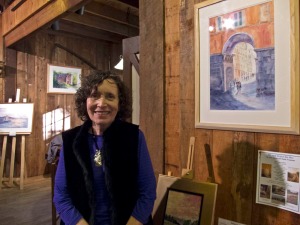 Sheila Trautman poses near her work.

The exhibit is called Oil and Water Do Mix, and Peter (an oil painter) and Sheila (a watercolorist) demonstrate successfully the truth of that statement. Despite their using two different media for their paintings, their work does blend well. I wonder whether it has to do with the sense of place they bring to their work and, with that, their obvious love for the places they paint. Reading the captions to each painting was almost as much of a delight as seeing the paintings themselves. Of course, a number of the paintings depict scenes in the Mountaintop region,

Peter Liman with one of his paintings

and I felt privileged to recognize those; perhaps not many in this New Jersey venue could say that.  Bergen County has its own lively arts scene, and, although these two gifted artists are no strangers to the area (Peter is now resident there),  it’s nice to think of the people in northern New Jersey who are seeing Peter and Sheila’s work for the first time.

Oil and Water Do Mix is at The Stable Gallery, 259 North Maple Avenue, Ridgewood, NJ, easily reached off Route 17. The gallery is open Monday to Friday, 9 am to 4 pm, and the exhibit runs until January 31, If you can make it, do get to see it; it’s more than worth it.

Guests at the reception enjoying the art

The Mountain Top Historical Society (MTHS), based in Haines Falls, is simply amazing for the amount of work they do to preserve, chronicle, and educate people about the history and culture of this area of the Catskills called “the mountain top” — think Route 23A in Greene County, Hunter, Tannersville, Haines Falls, and you get the idea of the location of this fascinating region. Yesterday I journeyed to the MTHS’  beautiful 20-acre campus to view their current exhibition celebrating the 125th anniversary of Twilight Park.

How to describe Twilight Park? Discreet. Low key. If you’re driving west on 23A, keep your eyes peeled for the left-hand turn once you exit Kaaterskill Clove or you’ll miss the entrance.  Twilight Park is a summer community founded by Charles T. Wingate in 1888, at a time when such communities were growing in popularity. It didn’t take long for the new community to experience considerable growth: by July 1888 there were already six log cabins, five cottages, a clubhouse, a pharmacy, and tennis courts. Sports of all kinds have been a mainstay of Twilight Park, as have the arts. The first exhibit of the Twilight Park Artists was held in August 1947. Originally begun as an experiment exclusively for Twilight Park residents, the show is now open to all artists and is held the second weekend of August.

The MTHS exhibit celebrating the 125 years of Twilight Park is a comprehensive and varied collection of memorabilia that brings to life this Northern Catskills summer community. Sports trophies abound, as do visuals documenting the community’s ongoing interest in and involvement with the arts. There is even a tea set from the days when the Ladies Auxiliary held tea lunches to benefit the local church.

The exhibit is in the restored Ulster & Delaware Railroad Train Station on the MTHS campus. Enhancing the exhibit will be two upcoming lectures. On Friday July 12 at 8 pm, historian Bob Gildersleeve and Joanne Ainsworth, author  of We Are Creating a Community, will present “Creating a Community: Early Images of Twilight Park” in which they will introduce glass plate negatives that have been donated to the Society by Dr. Stanley Leavy. On Friday July 19 at 8 pm Nicholas Lemann will present “The Prehistory of Twilight Park,” focusing on Charles Wingate, the Twilight Club in New York City, and the historical and intellectual thinking that gave rise to Twilight Park and similar communities.

If you’re interested in the history of an amazing community in the Northern Catskills and want a great introduction to the tireless work of the Mountain Top Historical Society and its picturesque surroundings, I can highly recommending attending one of these events. Visit the MTHS website for further information.

IN OTHER NEWS: Our book Historic Hudson Valley: A Photographic Tour is published this month! Click the image for details.