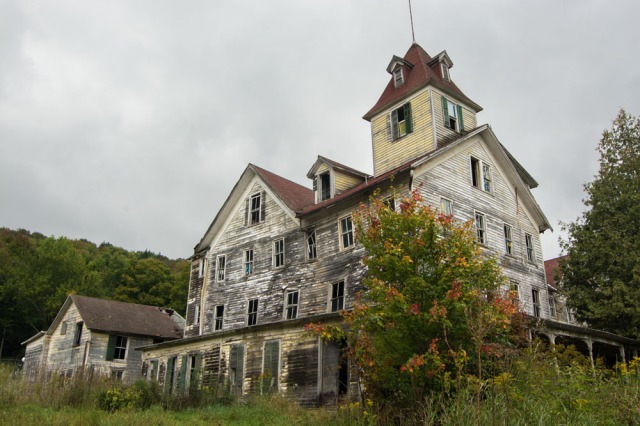 It’s easy to find if you turn south at the traffic light just as Route 23A enters the village of Tannersville from the west. Follow the road as it bends to the right and before long you’ll see it looming on your left — the poor abandoned remains of the once magnificent jewel of Tannersville resorts, Cold Spring House. Back in the heyday of Catskill resorts Cold Spring House could boast of being not only the second largest one in Tannersville but also the first one to welcome Jewish guests. Built in the 1890s, it ceased operation sometime just after the middle of the twentieth century. 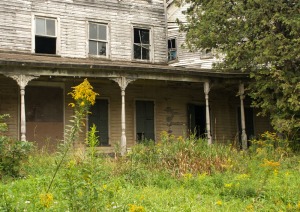 I first photographed the Cold Spring House in August 2013 and have returned three or four times since, to document its appearance at different seasons. And, alas, to witness and document its decline. This past Saturday a delightful motorcycle-riding couple visiting from the Midwest spent a few moments examining the house and grounds, and then, probably assuming that anyone casually crouched at the side of the road over a tripod and DSLR camera must be an authority on things in the area, asked me if I could tell them anything about the history of this house. (It turned out that the nice gentleman had spent a few summers at the Latvian summer camp over toward Elka Park in his younger years.) I told them what I knew and suggested that they could learn more if they googled the name; I knew this would take them to Greene County historian David Dorpfeld’s fine article in the Register Star from two years ago. 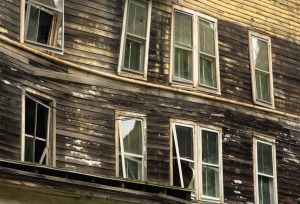 in seeing two more ruined hotels) they asked whether I would be posting any of my pictures of Cold Spring House online. I gave them my card, which happens to have three small photos on the front. He pointed to the middle one and asked if that was the same place. Yes, it was. We marveled at the extent to which it has changed — deteriorated — since I took the picture, 13 short months ago. Whenever I tell people I’ve been to photograph it again they will sometimes ask me, “Is it still standing?”  My usual reply is, “It was two days ago [or however long since I was there last] but I can’t guarantee whether that’s true now.” They understand.

Here are some photos from my shoot on Saturday. I wanted to capture the building amid the autumn-colored flora–red, yellow, and orange life springing up among the sad decay of the building. Perhaps you’re wondering whether a place like this harbors ghosts. I can only assure you that if it does, they are friendly, positive ghosts. 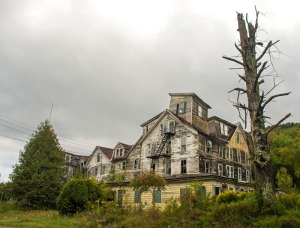 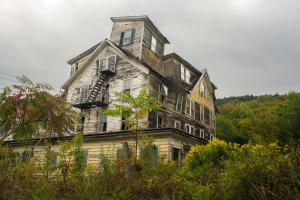